“Ten years now that I’ve been carrying round my flight cases, Sunday tee shirts and headphones; every weekend. Each Fridays, around four, the official DJ ritual starts in all its shining glory. Preparation of soap bag (with makeup for specific ladies), airline tickets in right hand, passport in pocket, and eye out the window to locate taxi downstairs – five flights down. The interphone will soon squeal, it’s time to unplug the P910 charger and stick it into DJ bag with the ever-indispensable shades for gloomy mornings. A minute left to dig up some undies on the washing line, just in case. I press on the elevator button, roaring to go.

Ten years, during which mixed compilations have steadily replaced the scenic recordings on Nick Hornby’s shelves. I’ve often put aside this “obligatory” measure. I’m sceptical about the imperfect and breathing aspect of live mixes. Today, this exercise is completely disrupted by a vicious electronic intelligence. The arrival of selector mixes and the magic of loops assembled on 23-inch Apple screens, have thrown out of the window everyone obsessed with original and authentic mixes. The art of DJing disappears. It’s lost its sacred aura to the profit of easy listening, aseptic and assisted mixes.

I was amidst the elaboration of the second album, when I felt the need to honor my most faithful companions: a mature trio of SL1210 and their younger sibling, SL DZ1200. They endured a gargantuan amount of mixes, put on a door used as a table – around a xone 92 and a loop machine – succumbing to hours of sharing. I dug in my performing years and in the delicate new releases of the day. Iggy Pop’s ‘Nighclubbing’, dubbed to the hedonism of the first raves of ‘The Age of Love’, Radiohead’s idiotheque to young pianist Francesco Tristano, Basic Channel’s minimalism to Ricardo Villalobos’ sensitive groove. So many different universes gathered in an hour, live, with no assistance or computer. Just some adrenalin, the taming of a pitch, a zest of zeal and a good dose of desire.
This is generally how great days come about, in between sweat and smiles.”

“La 11ème Marche” a few years ago. His first album Blossom (2003) highly acclaimed by the critics all over the world was a milestone for the new dance scene mixing inventive melodies, groove and beats.
Alongside his music Sebastien Devaud (aka Agoria) spread his dj skills around the globe every weekend from Brazil to Japan, UK, Germany, France, Belgium, Spain, Netherlands… list of countries is really too long!

Agoria was elected best 2004 DJ by Trax’s magazine readers probably because his attention to emotion and detail in his sets are staggering. So it was about time to lay this down on a CD : Cute & Cult!
Inside: 15 years knowledge, rare & beautiful things and an exclusive new track Les Beaux Jours done especially for the project. A way to keep us patient before his second album… 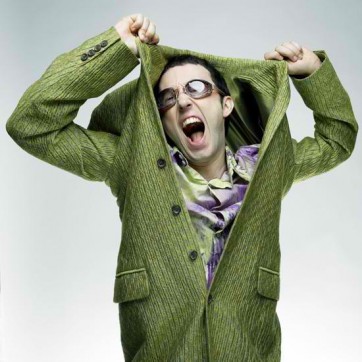